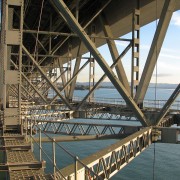 A macho “she’ll be right” attitude is being blamed for New Zealand’s rate of workplace injuries.

New Zealand has more than 200,000 occupational injuries each year that result in a claim to the Accident Compensation Corporation (ACC). Australia, which has a population about five times the size of New Zealand’s, reported 531,000 in the 12 months to June last year.

ACC has released a breakdown of number of claims it received in 2014. Dairy farming was the largest source, with 11,748 active claims last year, which cost the scheme $26.5 million. That was followed by house construction, which had 9741 claims. Sheep and beef cattle farming came in third place with 7687 claims. The cheapest claim by any industrial sector was $150 paid out to people working in art pottery manufacturing. There were fewer than three claims in that sector in the year.

Anders Crofoot, national vice-president of Federated Farmers said farming featured so highly in ACC claims because those in the industry worked outside, in all conditions, dealing with machinery and unpredictable livestock. He said farmers had traditionally had a cavalier attitude to work safety. “Maybe because of that macho frontier mentality.” But he said that was changing as farmers realised the sense in applying work safety practices. “Education takes a while but it does filter through eventually.” Crofoot said accident statistics should be measured against what had gone before, not against a rate of zero. “Take quad safety, yes accidents are happening and things could improve but people forget the alternative is horses. They forget how often people got hurt when horses were the only option.”

Charles de Lambert, of safety consultancy firm Safe and Sound agreed a “number-eight wire” attitude could be to blame for New Zealand’s high accident rate by international standards. “Kiwis have a great attitude to work, they get on and do it and I think safety comes a little bit second. If there was a silver bullet, I think someone might have found it.” He said employers should involve their staff in devising solutions to improve workplace safety. Firms’ management of high-risk hazards such as heights and workers operating in confined spaces was not as good as it could be in a number of industries, he said. De Lambert said younger people coming into the workforce had a better understanding of safety considerations. “You can drive along any rural road and find people on quad bikes not wearing helmets. They’ve done it that way forever and don’t want to change.”

Introduction to the Health and Safety Act

Health and Safety Act into force
Scroll to top